What You Should Know About Hay

There is a lot of talk about alpaca hay. Concerns over what type, what content, what cut and how much to feed keep popping up in different articles circling the Web and although some of them have valuable information, others contain info geared to specific geographic areas of the alpaca empire and may not be applicable in yours.

Lets start with the basics: the alpaca is an herbivore, meaning it eats plants. They will eat just about any type of plant as our garden can attest to on the infrequent occasion that a couple might escape the paddock and wander over to it. However, not all plants are good for them and some are downright poisonous.

So what type of hay should you feed your alpaca? There is no easy answer to that and maybe there might be more important questions you should be asking, as I will explain. Not all hay is the same, as it changes from geographic area to season to method of harvest. With that said, it would be foolish for me to tell people from California what to feed when most of the time their availability of grasses is totally different than what we have here in New England. Having been in the hay business in New England for years, I know that the hay harvested from the fields I manage changes from year to year depending on the amount of rain, snow, sun, and temperature. I say it changes, not the type of grass, but the quality, content, and quantity. Even the same type of hay harvested by different farmers in different fields might be different due to a multitude of factors affecting the potential nutrient content. Factors may include what type of grass it is, how old the grass was when it was cut, the type of baling method used, handling procedures and last but not least, storage techniques.

Very few alpaca farms harvest their own grasses, choosing to purchase it from farms or dealers. However, when you do this you need to ask some important questions. Did the producer take a sample of the forage and have it analyzed? How was it stored, how old is it, what type of grass is it, what type of fertilizer did they use on the field, if any? Are there any weeds like milkweed or goldenrod in it? These questions are very important and how they are answered might tell you more about the hay than what a lab result will. Now don’t get me wrong, lab results are very important for understanding proximate analyses, fiber analyses and the calcium and phosphorus levels, but knowing how the hay was grown, handled, harvested and stored is just as important.

Most alpaca farmers understand the concept of first, second and third cut hay, but just in case you don’t, here is a little refresher. First cut hay is hay that was first to grow in the field with the coming of spring. In most cases this hay is coarse and may have larger diameter and longer stems than a later cut. Here in New England we refer to this type of hay as “horse hay.” I say horse hay due to the fact that a horse’s digestive system needs “roughage” to keep everything moving from one end to the other. Very fine hay may be too rich or may “ball up” in the horse’s digestive process slowing or stopping it altogether. Second cut hay is hay that has been harvested after it re-grew following the first time it was cut that year. This hay has a tendency to be finer and softer than first cut with shorter and smaller diameter stems. It may contain more grass leaves and generally speaking has no or few seed heads. (If harvested correctly) When you are looking to buy hay, break open a bale and look for the number of blossoms and seadheads. The more blossoms and seedheads you find within the bale, the hay was most likely harvested late in its life cycle and the quality may not be there.

Generally speaking, this hay is shorter, thus the harvester gets a lower yield. If the hay was baled using the same equipment as first cut, the bales might be a little heavier due to the finer nature of it, thus being easily compacted. Second cut hay is generally higher in nutrients, if, and only if, it was handled properly.

The third cut, if available and perfectly handled is considered dairy quality (if cut at an immature stage), as the highest quality forage is essential for maximum milk production. However, this cut of hay might be a little too “rich” to be fed to alpacas on a daily basis. But please keep this in mind… a perfect scenario when talking hay is not very realistic in most situations.

Weeds like milkweed and some other plants are actually bad for alpacas as well as some other animals and could be harmful to them if eaten. On the other hand, cows can eat milkweed with only minimal adverse reactions in most cases. Some sheep, alpacas, horses, cows etc. may like eating the milkweed while others may not, so in my opinion it is best to make sure it is not in the bale from the very beginning, don’t just hope your alpaca won’t eat it. The important question to ask is “is there a chance that it is in the bale of hay to begin with?” All hay fed to alpacas should be free of milkweed, briars, thistles, and all types of “thorned” weeds. Most people buying hay wouldn’t even ask about this thinking that a bale wouldn’t contain anything that would be bad for their animals. But cows eat anything, wet hay, moldy hay, weeds, thorns, they eat it all. And because so many dairy farmers produce hay for cows and sell the excess, they may not know if the bales you want to buy might contain something that is bad for alpacas.

Once the forage has been harvested, first second or third cut and/or purchased, it needs to be stored correctly to protect the nutrients it contains. The best way to store it is to put the hay in an enclosed dry barn or shed. If that is not an option, a new, waterproof tarp can be draped over the stack of hay and secured if the hay is loaded onto pallets and kept off the wet ground. Doing this will protect the hay from losing nutrients due to bleaching from the sun or the leaching of nutrients caused by rain or snow. The old timers in this area always said, “If the hay is very fresh and was just cut within a day or two, storing it cut side down will help it cure and retain more nutrients.” Although not a proven fact, I still follow this advice just in case it does work.

After one year of storage there is a slight decline in the nutrient value, so you should only buy or store what you will feed in one year’s time. However, if the hay was of good quality to begin with the decline after one year is relatively minor and the hay may still be of good quality. If the hay was good to begin with, was handled properly and stored correctly, a ten or twelve percent drop in quality should not affect the animals greatly if they are to be supplemented with grain.

Alpaca farmers may have heard that feeding 100% alfalfa is bad but this is not exactly true. Alfalfa is very high in calcium and protein, some say much higher than what alpacas need. However, this might not be a bad thing when it is used sparingly with other forage at times of need like birthing and extremely cold weather.

So in summary; test the hay you are buying or ask if the harvester has tested it. A good quality hay should run about 9 to 14% crude protein with total digestible nutrients of at least 50%. It should be dry, about 16 percent or less. Concerning first or second cut, it is a rule of thumb that the later the cuttings, the better the quality, but remember any hay that has been rained on, was baled wet or stored badly will be of poor quality. I feed my alpacas both first and second cut hay. Primarily I feed then second cut, but just like humans, they get tired of the same old thing. So to keep them happy at least once a week I throw them a couple bales of first cut just to keep life interesting. They either eat it or they don’t, if they don’t it makes good bedding.

Know your source, ask questions, develop a long-term relationship with them and try to avoid dealers that buy from many different farmers and different fields that might not know about the specifics of the hay you are buying. 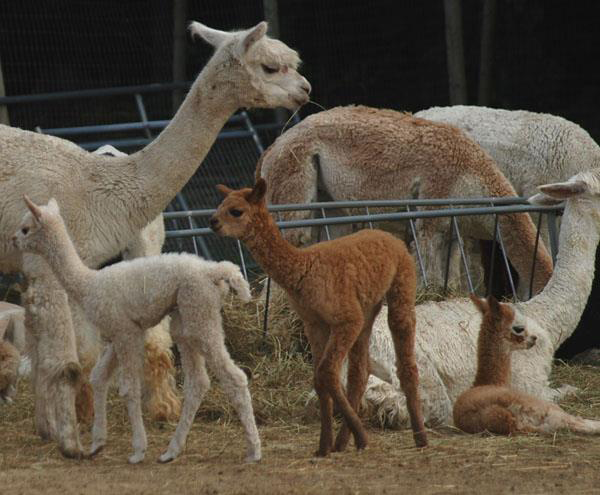 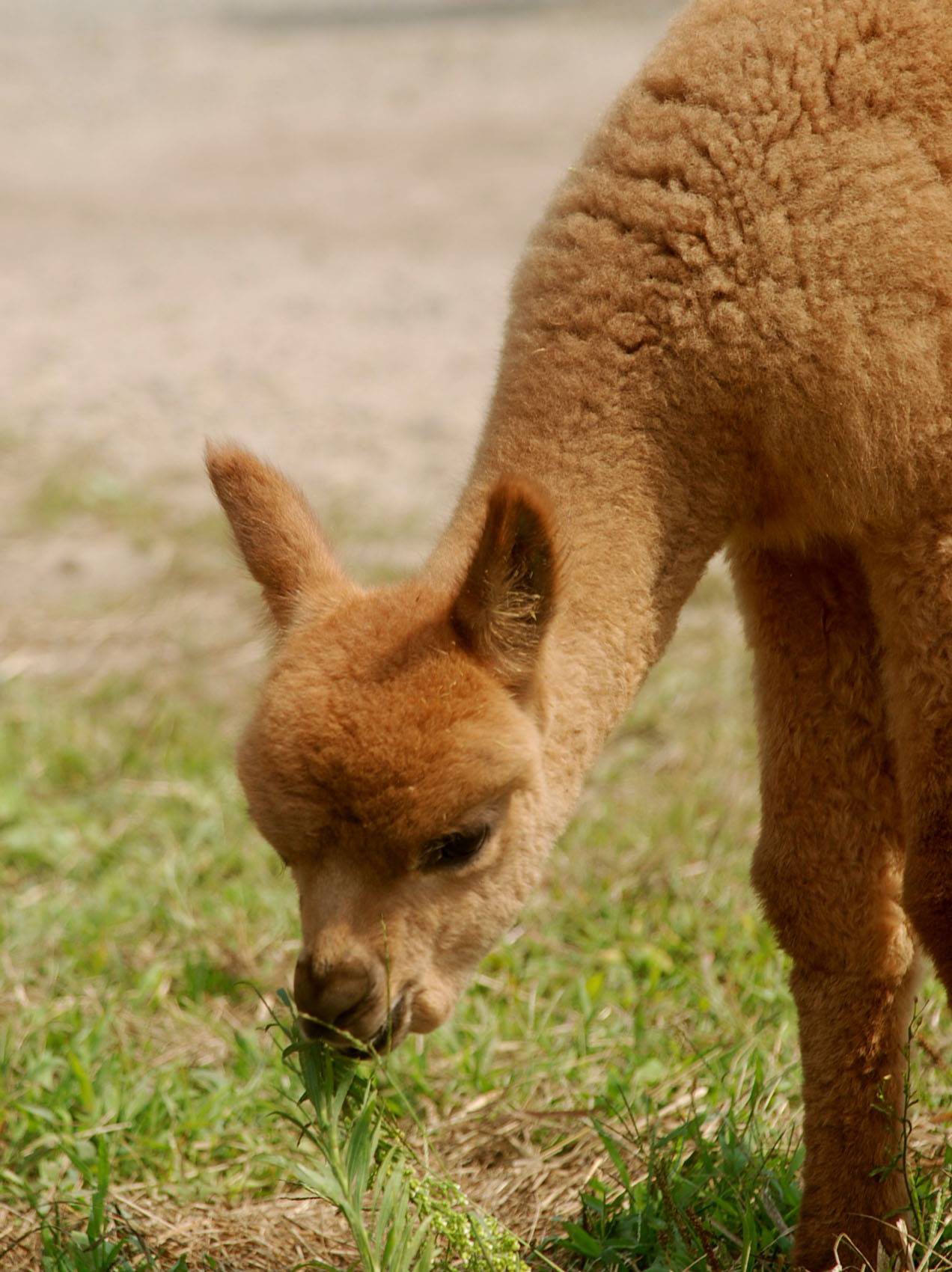