Known as Cornflake, this guanaco (a close relative to a llama) was abandoned on a property in Hancock following an eviction.

Alone on the property, she was likely to have fallen to coyotes, as had happened to some of her herdmates.

Tim and Dana worked with state and local agencies for assistance, but decided an old-fashioned all-hands-on-deck capture was going to be most efficient.

And be sure to follow us on Facebook... you never know WHAT's going to happen at Purgaory Falls!

With thanks to Ken Paulsen for the photos.

I noticed the answering machine light blinking as I took off my heavy, rain soaked coat and peeled my thermal coveralls off my frozen legs. Another beautiful New Hampshire winter day, consisting of freezing rain, sleet, and snow. I had just come in from taking care of our overfed, over-pampered animals, and listening to the messages on the machine was well below the shot-and-a-beer I had at the top of my list. But my better side won out and I pressed the “listen” button.

“This is Artie”, the message said, “I own a farm in Hancock, NH and have an abandoned alpaca, or whatever it is that they call them, roaming around and want to know if you want it.” Needless to say that got my attention on so many levels. The message ran on. “I had a tenant living here that had a bunch of them and when he left due to not paying rent, he took most of his animals, but left this one behind.  It has been without food and water for a couple weeks and I want to get it taken care of, give me a call if you are interested.”

I had already forgotten about the shot and a beer, as my fingers couldn’t dial the number fast enough. It rang a couple of times, then was answered with a “praise the lord.” Smiling to myself, I asked for Artie. Artie identified himself and then began to tell the story of how this poor animal had been abandoned on his land and how he figured it wouldn’t last much longer. I told Artie that I would be up at daybreak the next morning with a couple of people to see what was going on.

The next morning, in true New Hampshire fashion, the roads were slick with black ice as I pulled my truck and trailer over near Artie’s house. No lights were on, so I called his number, only to see lights come on after he answered. When he came out to meet us, Artie then began to tell us the story of how many agencies he had called and that none of them were willing to help save this animal. “How did you get our name?” I asked him. “Someone in town had heard about you and how you rescue alpacas all up and down the East coast,” he said. A little surprised at his answer but proud of the fact that our rescue missions had not gone unnoticed, we walked over to where the animal had been hanging out.

As the sky lightened and the freezing rain fell, Hannah, our ranch manager, spotted her lying near some brush in an open field. We did the usual things like rattle a grain bucket full of grain, talk sweetly, and yes, even baby talk, while the animal looked at us totally unimpressed. We walked around checking the grounds out, trying to devise a plan, and started seeing carcasses of long dead Llamas in the fields. Skeleton heads of others were set on posts pounded into the ground. As I saw the fate of so many other animals, the urgency of catching this animal increased.

“Okay,” I said, “enough of this BS, let’s get some ropes and catch this thing.” Easier said than done! After 3 hours of running our asses off while this animal walked over downed fences and through stonewalls, we panted and grabbed our chests trying to keep up with her.

We finally decided to go home, get another animal, and bring it back with us to entice this poor wild animal into letting us catch her.

An hour later we were back with one of our biggest and best looking males. We led him out to an area were the other animal was hanging out, and she couldn’t have cared less. Our male was interested in her, but the abandoned animal turned and walked away, never even getting close enough to see this fine stud’s attributes.

We put our stud back into the trailer where he happily ate hay and listened to us run back and forth for another 3 hours, all without success. Having to admit our defeat, we got back into the truck and thought of what to do next. We all admitted that with all the coyote tracks, the animal would not last long, so we had to do something quick, and most definitely needed a lot more people.

Now, it is without shame that I tell you, I hate Facebook. I have never been on it and when my wife tells me about things she sees on it, I tend to tune out. But I now must admit that what she did was incredible. She went onto Facebook and posted that we needed emergency help to rescue an animal, and the responses started coming in. Within a couple of hours we had friends, people we didn’t know, and others all offering their help and support. Within 9 hours of first seeing this poor animal, we had 15 people and a plan to rescue her. God, I hate eating crow over Facebook!

07:30 rescue day!
We started calling the animal Cornflake after a tenant on the property told us she had been feeding the animal cornflakes every morning. The name stuck and operation Cornflake rescue was underway. 15 people were present as we laid out the plans of how we would capture this animal. Plans that would rival the D Day invasion were presented to the group of volunteers standing around in, of course, snow and freezing temps. We drew maps, handed out photos, and talked of past animal experiences that were all good for a laugh. When the briefing ended we piled into cars and trucks and started a procession worthy of a State funeral. As we descended on the farm where poor Cornflake was camped out, she was standing on a knoll overlooking the road as if to greet us or maybe to see what the opposing army had in store for her.

Everyone piled out of their vehicles and started fixing fences, closing gaps in the stone walls and unfolding the plan we had set earlier. The Joint Chiefs of Staff would have been proud of the military precision in which everything was carried out.

The hunt!
Our plan was to herd the animal into an area that we had reinforced then close in on her slowly till we could get a halter on her. Things couldn’t have gone more smoothly and within 15 minutes we had Cornflake backed into an area almost within touching distance. Then the best-laid plans came unglued as she decided she wanted no part of any of this. She took off running towards the group of people holding a “rope fence” made up of people and thin rope. When she hit the “fence,” knocking two people down, we thought we could get her but she kept on going and to our great surprise took off into the 200 acres of snow, stone walls, and brush.

The regroup!
It took us about another hour to regroup and herd her back towards our trap yet again. Everyone was more serious now and realized just how strong this animal was and what might go wrong. Tensions were high as she slowly was driven into the same area that she escaped out of just an hour earlier. Slowly we closed in on her as she nervously paced back and forth looking for a way out. When the circle was down to about 30 feet, Cornflake made her move, and she bolted towards the stone wall. She was halfway over it when, thanks to some vines slowing her exit, I managed to jump on her and hold her back while others did the same. Cornflake was caught but I don’t know who was more exhausted, she or all of us! We got her into the trailer, did a quick exam, thanked everyone, and headed back to the farm as quickly as we could so she could be given some medications and released into a herd of others.

The release.
We were all out breath and shaking as we praised one another for doing such a good job, trying not to remember that she kicked our asses a couple of times before. She was safe and on her way to a good home. We drove the trailer into the paddock where the other alpacas and llamas were hanging out. As we entered, they all came around and sniffed at the trailer to see what had arrived. I loaded up some medications and got some probiotics and filled up our new friend with good doses of everything, then opened the door. Cornflake looked a little shocked at first as over 70 faces stared back at her. She walked slowly out of the trailer and into our hearts. For the first several hours she just walked along the fence lines with huge mouthfuls of hay hanging out of her lips, but slowly she came to realize that this was a safe place with plenty of clean water and good food and that she would maybe, just maybe start to like it. 12 hours later as we went out to do our morning feedings she was still near the fence, but as I walked up to her to give her a bowl of grain she didn’t budge. Yesterday she would have run away, but this morning, she followed me back to the gate before returning to her bowl of food, a sure sign that she understands that only good will come to her here.

We want to thank everyone that supported us and especially to all of those that came to help. A special thanks to Mike and Betty Anders of Rough Cut Alpaca Farm for taking time out of their busy schedule to help save an animal with people they had never met before.

I would also like to bring attention to the fact this sort of thing is happening to animals every day all over this country. State and Federal agencies refuse to help due to red tape that prevents them from helping domesticated animals, or sometimes prevents them from helping farm or wild animals. The gray areas abound, and as we all saw first hand, we couldn’t count on any agency to offer us any assistance. If you see abuse, report it, and keep reporting it to the same agency as well as others when nothing gets done about it. Sooner or later, the right people will hear about it and something will get done, that is, if it’s not too late!

Next Article: What You Should Know About Hay 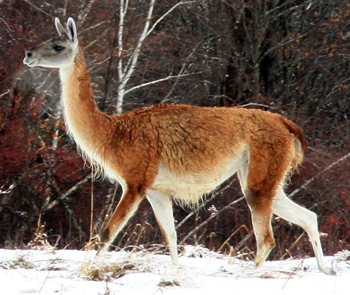 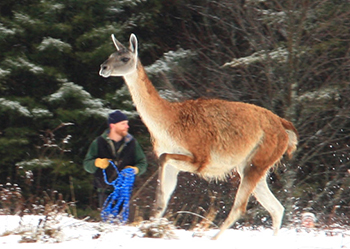 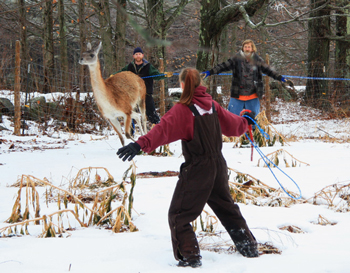 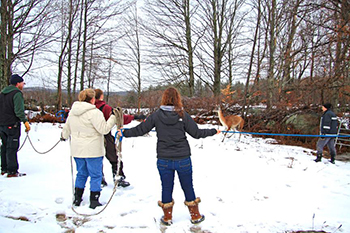 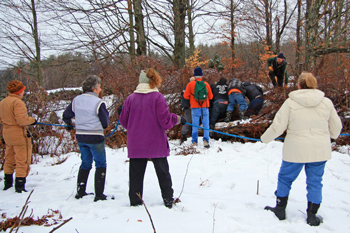 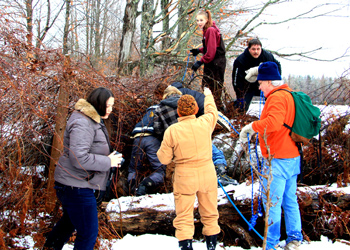 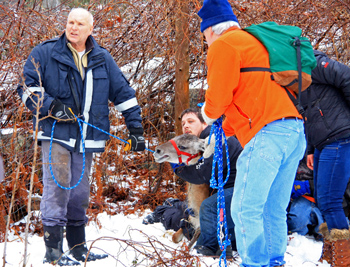 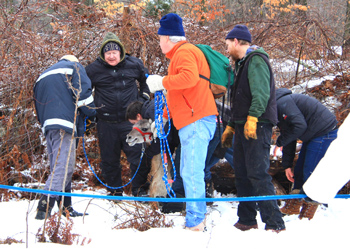 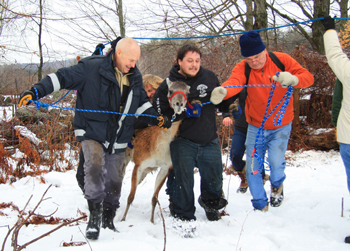 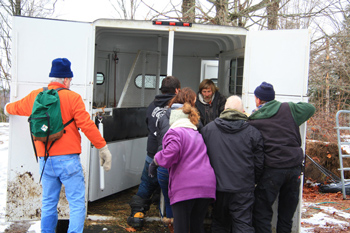 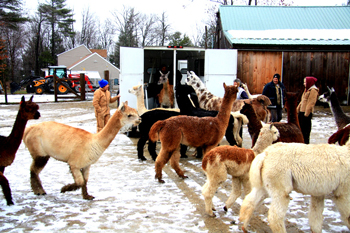 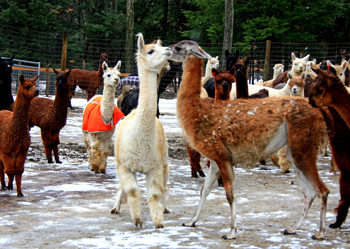 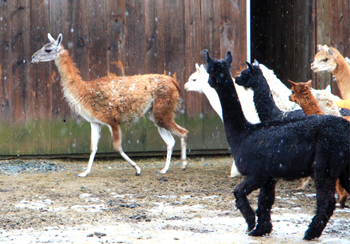 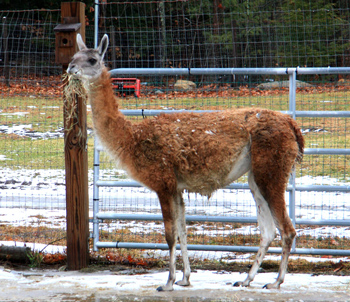